#titles — third in a series

Early in my career I worked for an ad agency as a writer. This firm had high expectations from its creative staff because the CEO was a seasoned art director. Mediocre work was not acceptable. My boss would repeatedly hand my copy back to me and tell me, “You can write better than that.” It infuriated me when I had to rewrite the same ad four or five times. But by the fifth time I grudgingly accepted that my boss was right. The rewrites were making me a better writer, but I also learned ads were more than just words.

The process of finalizing an ad — putting words and images together — was equally tough. I worked closely with the art director to craft an ad that would be memorable to whoever saw it. The Creative Director had to give the final stamp of approval before the ad was considered complete. More times than not, we had to go back to the drawing board to improve the ad. It was a brutal process that made us all better at our craft. But there was one final approval that was the toughest of all — the CEO.

In this agency creative was king and the king, the CEO, was a creative at heart. Everything needed his approval before it left the shop to go to the client. He demanded nothing less than our best. You can imagine my fear as I rode the elevator to the top floor with the creative director and art director to review the ad campaign we labored over for days. This was my first CEO review, but not for the other two in the elevator. No one spoke a word on the ride up, which only heightened my fear.

When the elevator doors opened, we were greeted by a receptionist. “He’s waiting for you,” she told us. My heart rate quickened as the three of us walked into the CEO’s office. A sharply dressed man in a deep blue suit with a stylish tie warmly greeted us. He acknowledged my two companions by their first name, then looked at me. “This is our new writer,” my creative director introduced me. I shook his hand. A firm, yet gentle grip that expressed confidence. He had an air of creative style about him, someone who felt details mattered.

“We can spread out the campaign on the table,” the CEO said. My creative director spread out the ad layouts on the table and the CEO instantly began to study each ad. The silence in the room was almost too much for me to handle as I watched him hover over each ad. When he finally spoke, he espoused creative wisdom, showing us ways to enhance each ad.

“Oh my,” I said to myself. “That’s a Gucci watch he has on his wrist.” I stared at the watch and marveled at its sleek design — stripes of pearl inlay with small diamonds where the 12, 3, 6 and 9 would be on a watch. I once saw a pictures of this expensive watch and now here was one right in front of me. I became hypnotized as I admired the design of his Gucci watch while he waved his hand back and forth. “That had to cost a small fortune,” I thought as I stared at it, totally distracted.

“Do you see what I’m saying?” The CEO said to me as I watched his Gucci watch disappear under the sleeve of his suit jacket as he stood straight. “Uh, yeah, I do,” I nodded. “The pictures and words must work together,” I repeated the last line I heard. “Exactly,” he said.

A few minutes later we were back in the elevator with our ad layouts. When the doors closed and we started to descend to our floor, I blurted out, “Did you see his Gucci watch?” My creative director looked at me and smiled. “It’s a very stylish watch. It grabs your attention. It’s memorable just like our ads should be.” I smiled and nodded. He had made an excellent point.

To this day I still remember that Gucci watch on his wrist, waving back and forth. The image in my brain is vivid, as if it just happened a minute ago. I can still see the inlaid pearl strips reflecting multiple colors in the light. I wish I could say the same about the ad campaign we presented that day to the CEO. I can’t remember a single thing about those ads.

Every once in a while you encounter the chance of a lifetime. I’m not talking about an opportunity at fame or fortune, but those rare moments in life when you upstage someone who has more power and prestige than you. I had one of those moments early in my career and I lived to tell about it.

In the early 1980s I was hired by John Deere as a copywriter. I was in my early 20s and it was my first job out of college after receiving a degree in Journalism. I was thrilled to earn a regular paycheck even if I was only writing machinery brochures and advertisements. As I cranked out the copy month after month, I kept telling myself that I was building my portfolio for the next step up. Two years into the job, my opportunity came.

A headhunter called me. She was looking for a writer to work for the advertising agency that handled the marketing for Ford Tractor, a direct competitor to John Deere. There was something about going to work for a competitor that gave me a sense of adventure. I agreed to send her my resume and writing samples. Two weeks later I was sitting in the conference room of the ad agency across from the creative director and the vice president of the firm.

“Our client is beating us up about our work. He’s challenged us to hire a writer from their competitor,” the vice president told me. “You’re just what we need.”

Suddenly my ego was over-inflated. They actually needed me to keep their client happy. I would be their hero if I went to work for them. I agreed to their job offer and the following Monday I was back at my old job plotting my departure. I knew that the moment I told them I was going to work for a competitor, they would immediately escort me out the door for fear I would take trade secrets with me.

For two weeks I slowly cleaned out my desk, keeping only enough items on display so as not to create any suspicion. I also worked to wrap up as many projects as I could and assembled a list of pending projects. Someone once told me to leave a job on good terms because you never know when you might need your former employer. My wife and I also made arrangements for a moving van and a temporary place to live. After three weeks of preparations, moving day was upon us.

The moving truck showed up in the morning on schedule and I went to work. My plan was to tell my boss after lunch and then I would promptly be dismissed. Everything went as planned and the next morning we were off to a new city and a new job. Two days later I was sitting in my new office getting oriented to my new job. The vice president of the ad agency was anxious to have me meet their client. That opportunity arrived about a month after my arrival.

The Vice President (VP) of Marketing for Ford Tractor, the agency’s major client, was sitting at the head of a big table in the ad agency conference room with two of his staff members sitting on each side. The entire agency creative and account team filled the rest of the table. I was sitting at the back corner of the table almost directly across from the VP from Ford Tractor. The vice president of our agency wasted no time in introducing me.

“Here is the writer we hired from John Deere,” he proudly announced, pointing to me.

I nodded and smiled. The politeness abruptly ended at that point.

“So, you wrote advertising for our competitor,” the VP said as he frowned at me with a skeptical look.

“Yes,” I replied. My pulse quickened as I prepared for an interrogation by a seasoned professional. How could I possibly match wits with my meager three years of experience?

He quickly scanned a dozen or so John Deere product brochures he had spread out on the table in front of him. I watched as he grabbed a brochure and waved it at me.

“What makes you think you can write a brochure as good as this one,” the VP snapped.

“Because I wrote that brochure,” I replied with a smile.

To my amazement, he had selected a brochure that I wrote for John Deere a few months before joining the ad agency. The room was dead silent for a moment. With one sentence, a lowly writer had disarmed this executive in front of the entire ad agency staff.

Suddenly the VP broke out in laughter. The tension in the room immediately lifted and we began a productive discussion of the marketing strategy for the coming year.

I now realize that was a rare moment in my career. It’s not often we get a chance to disarm someone with position and power who is intent on tearing you down. It was a chance of a lifetime that I more fully appreciate now more than 30 years later.

(Below: The infamous brochure.) 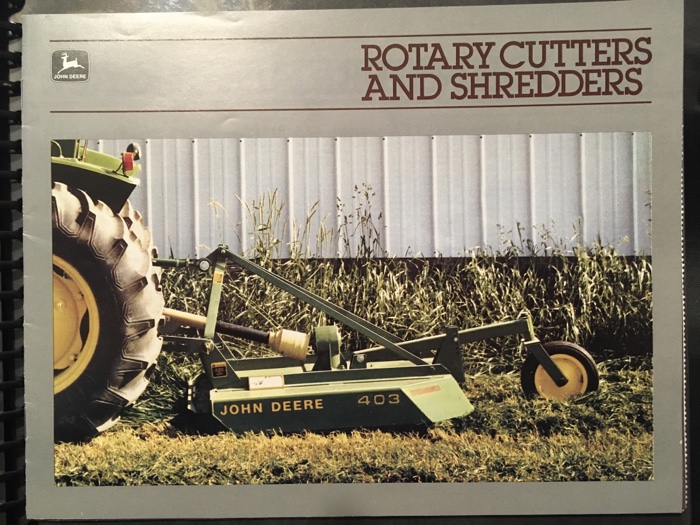